An incredibly ancient and historical town, Siracusa overlooks the sea. Of huge importance to the Greeks, with a population of 500,000, Siracusa competed with Athens to be the most powerful city of the Ancient World. Archimedes, who lived and was eventually killed there, invented war machines, which made life very difficult for the Romans, who later succeeded in their dominance of the city. Normans and Arabs also realised the strategic importance of the port of Siracusa and left their marks.

Today, there are only about 120,000 people living there and Ortygia, the small island, which is connected to the main part of Siracusa by bridges, still feels as if it is a miniature version of history, with almost 3,000 years of the past crammed into its narrow streets and piazzas.

Spreading away from Ortygia are the other quarters of the city, which hold such things as the Greek and Roman theatres and the archaeological museum and park. Noted for its dry, warm climate, Siracusa is a delight to stroll around and feel part of its history, at any time of the year. Making it the ideal base for not only enjoying beautiful views, but also exploring the rest of Sicily. 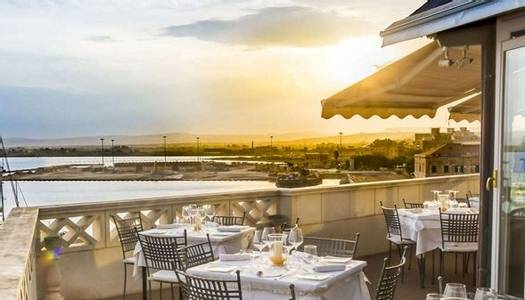 Siracusa, Sicily & The Aeolian Islands
Grand Hotel Ortigia
from £798pp
Based on 7 nights
View
View All Our Accommodation In Syracuse

Syracuse At A Glance

Distance from Siracusa to the Airport: approx. 1 hour

Siracusa is Best Known for: Incredible fish dishes being savoured with a glass of vino, overlooking the fishing port.

What to Eat in Siracusa: pear-shaped provola dei Nebrodi cheese, granita, which is a semi-frozen dessert, fried sardines served on top of poached beetroot and orange, seafood platters.