Matera, on Basilicata’s boundary with Puglia, is world famous for its honeycomb of caves (sassi) and frescoed rock churches, Known to be a memorable Italian holiday destination. Matera is in Basilicata and is not always the most well known place for those in the UK. One of the best things about Matera has to be the fascinating caves. In fact, the caves have become the heart and soul of Matera.

These caves were once habited as they stood, however bad conditions during the 1950s meant that all the residents needed to find somewhere else to live. The 1980s saw these cave houses re-instated, redesigned and once again lived in.

The cave houses are fascinating and well worth a visit to Matera alone, however if you want to learn even more about the history then you can learn more about the town in the Museo Nazionale Ridola and also live the old style cave house experience with some of the reconstructed caves such as the Casa Grotta di Vico Solitario. 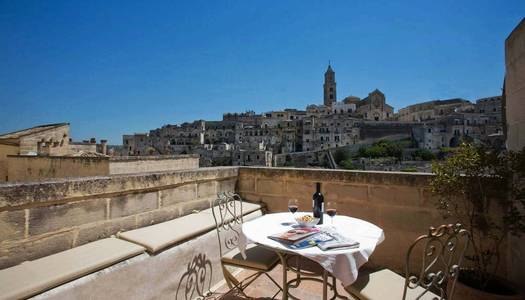 Matera, Calabria & Basilicata
L'Hotel In Pietra
from £518pp
Based on 7 nights
View
View All Our Accommodation In Matera

Matera At A Glance

What to See in Matera: Visit the Sassi cave-dwelling district, take a tour and visit historic reconstructions of cave life where time seems to have been frozen.

Matera is Best Known for: Explorations off the beaten track, History and Culture being a UNESCO Site.

What to Eat in Matera: crapiata, an ancient legume and cereal soup that’s perfect nourishment on colder days, lamb dishes, peperoni cruschi (dried sweet peppers); lagane, a fresh pasta similar to tagliatelle but thicker, broader and shorter; the cialledda, also known as the “reaper’s breakfast”, which is a mixture of wet bread, tomato, cucumber, peppers and olive oil.