Holiday At A Glance

In Southern Italy, you can find a treasure trove of amazing historic and cultural sites, some of which form part of the UNESCO World Heritage list which encourages the preservation of these unique and timeless treasures.

The regions of Puglia and Basilicata in southern Italy, may not be as well known as some of the country’s other attractions, but this beautiful peninsula, otherwise known as Italy’s ‘heel’ is full of fascinating sights. It is a great destination for those wishing to avoid the crowds and enjoy a more authentic experience. Amongst the Italian Heritage list and the 51 Unesco World Heritage Sites which are located in Italy, two listed sites are located in Puglia and another one is in the neighbouring region of Basilicata.

Castel del Monte: A magnificent Defence castle built by the Emperor Frederick II in the 13th century. Castel Del Monte is a symbol of medieval military architecture and it is perfectly preserved, standing proudly on the hills of Andria. Universally considered an example of genius in medieval architecture, Castel del Monte actually unites elements of diverse styles and traditions from different epochs in history. Visitors can see this in the Romanic lines of the lions at the Castle’s entrance, in the Gothic cornice of the towers, in the Classical movement of its interior frieze, in the defensive grandeur of the structure in general and in the Islamic refinement of its mosaics.

The Trulli of Alberobello: The site of the trulli, the characteristic cone-roofed houses of Alberobello, Apulia, is one of the 51 UNESCO World Heritage Sites in Italy. The name derives from the late Greek word for the dome and refers to the ancient stone houses with conical roofs, constructed with the abundant limestone from the plateau of Apulia’s Murge zone.

These impressive and unique structures, largely present in the Valley of Itria, can also be found in the Provinces of Brindisi, Bari and Taranto. They are a fascinating example of architecture that is spontaneous, yet imperishable; to this day they are still used as homes.

Alberobello, an inland village,is undoubtedly the Capital of the Trulli: Thesse iconic white structures are integral to its historic centre which is what makes it so famous and easily identifiable.

The Sassi and the Park of the Rupestrian Churches of Matera:

Located in the southern Italian region of Basilicata, bordering Puglia, The Sassi and the Park of the Rupestrian Churches of Matera comprises a complex of houses, churches, monasteries and hermitages built into the natural caves of the Murgia. Covering an area of 1,016 hectares this remarkable and intact troglodyte settlement contains more than a thousand dwellings and a large number of shops and workshops. The property was first occupied during the Palaeolithic period and shows evidence of continuous human occupation through several millennia until the present day. It is harmoniously integrated into the natural terrain and ecosystem.

Matera is the first city of southern Italy to be nominated as European Capital of Culture for 2019.

Arrive at Bari Airport and meet your driver for your transfer to Relais Corte Altavilla for your five nights stay. Check in and enjoy your aperitif. Depending on the arrival time of your flight you will then have free time to relax and enjoy your welcome dinner at the hotel’s rooftop restaurant Terrazzo Goffredo, a four-course tasting menu (you can choose fish, meat or vegetarian menu) excluding beverages which will be payable locally to the hotel.

Orientation meeting with the hotel’s front office about the region. 10.30 Meet your driver for your first stop which will be Castel Del Monte. He will drive you to your first Unesco Site on this tour and allow you two hours to enjoy this magnificent structure. Purchase your own entrance ticket locally as it is not included in the package. Afternoon: Continue to Trani, a beautiful coastal town with a magnificent cathedral located by the sea. You will have a couple of hours’ free time in the town before returning to your hotel. Dinner at your leisure. There are a number of very good restaurants within walking distance  from the hotel to choose from as well as typical trattorias where you can taste local cuisine in beautiful surroundings. We will be happy to make suggestions and book these for you in advance or the hotel staff will be delighted to do this for you locally.

Depart at 09.30 for a full day tour of Matera, another mesmerising Unesco site located in the Basilicata region. As there is a lot of walking involved in Matera, we strongly recommend comfortable shoes for this trip. Your driver will drop you off at the main square where you will be able to walk through the city at your leisure and own pace. If you prefer a guide to be with you on this day this can be arranged at a supplement. Please let us know at the time of your enquiry. There are a number of very good restaurants, small bars offering simple snacks and typical street food & drinks at different locations. Lunch will be at leisure and your driver will meet you at the agreed location abound at 16.00 to take you back to your hotel. Please note: We can also book you a wine tasting session at a local winery en route to the hotel or a private wine tasting at the hotel with a sommelier at a supplement. Please enquire for details and costs. Dinner is at leisure.

A full day tour starting with a pick up from your hotel at 10.00 am visiting the Trulli capital of Alberobello. You will arrive at around 11.00 and have three hours’ free time to enjoy this magnificent fairy-tale town at leisure. Afternoon: Meet your driver at the agreed location and continue to visit Ostuni. Ostuni is a beautiful whitewashed hilltop town with fascinating history and architecture. You will be able to walk to the top of the old town and enjoy the magnificent views of the coast from one of the small terraces scattered between buildings. Return to the hotel for your 6pm Spa for two (Salus Aquam Route where you will enjoy the sauna, body scraping and the jacuzzi in the hotel’s intimate and charming spa) with herbal tea.  Treatments are not included but can be booked as extra at the hotel’s reception in advance. Massages as well as a number of facial treatments are available to book. Dinner is at leisure.

Day at leisure . Optional extra: You can add a day tour to Lecce & Gallipoli on this day at a supplement, or simply relax at one of the local beaches (depending on the season of your trip). Another alternative is to visit the Castellano Grotto & Polignano a Mare with a possible seafood lunch in Polignano.

Depending on the departure time of your flight, transfer to the airport and check in for your flight home.

Where you will stay:

•   A private transfer is included in this package as well as a private driver with an air-conditioned car (excluding guide services and museum entry tickets on Day 2, 3 & 4 for tours mentioned below).

•   Flights are available from London Gatwick, Stansted & Manchester (on selected days only) and a supplement may apply to some departures depending on the price of the flights on the chosen date. Package price is based on London Gatwick Easyjet flights and given as guidance only. An up-to-date price will be given to you at the time of your enquiry.
•   20 Kg luggage per person is included in the costing of the package.

Optional extras at a supplement:
•   Wine & olive oil tasting at local cellars
•   Private Wine tasting at the hotel with a sommelier
•   Add a private tour on Day 5
•   Add another hotel and extend your stay in the region

Have a question, or want to discuss how we can personalise this holiday for you, please call one of our travel experts or enquire online. 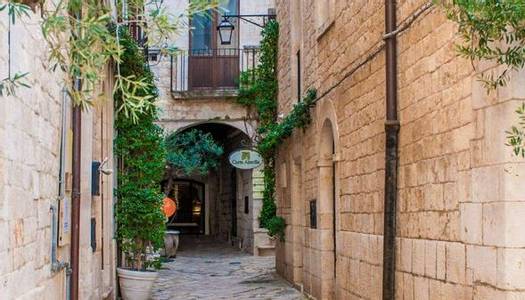